5 Things That Really Happen To Your Body After A Baby. (that everyone is too scared to tell you)

I feel like I owe you all an apology. I’ve been holding something back. I’m normally so honest with you, but this time I haven’t been able to bring myself to tell you what I’m about to say.

It’s not pretty, it’s not cute, and it might just send you off to the hysterectomy clinic the second you’ve finished reading it.

Ladies, for those who are already pregnant or thinking about getting pregnant, this one’s for you.

We’ve all read the articles about the weight gain, flatulence, stretch marks, leaky boobs and heartburn. None of this should be a surprise anymore. But what these sons of bitches don’t tell you, is what happens after you give birth. After the C section scar has healed, after your milk has dried up and after you’ve pretty much returned to normal. THAT’S when the fun starts.

I first noticed it about 8 weeks after having my son. I finally found the energy and enthusiasm to shave my legs. Well, atleast I thought I’d shaved my legs, but when I woke up the next morning the hair had returned, thicker and darker than ever before. Blaming the mum-dumb I returned to the shower, and shaved them again. Only to find that within minutes, more black-pube like hair had sprouted from the very place where the razor had just touched. Turns out that having a 3.7 kilogram human pulled aggressively from your womb isn’t torture enough – your body then decides to manifest hair faster than a drain at a communal camp site.

(Oh, and in case you were wondering, this isn’t limited to legs and armpits.)

Think back to a time when you were the most nervous, and when your body, startled into action, produced the most sweat it has ever produced. For me this was on my wedding day. Granted, it was mid November, hotter than hell and I happened to be dressed in a frock made entirely out of feathers and poef, but I was shvitzing faster than Bill Cosby at a modelling convention. Fast forward to 5 months post partum and my wedding day has nothing on this Sweaty Betty. In pregnancy you glow, in post pregnancy you shall sweat and stink and berate the CPA for falsifying Mitchums 48 hour promise.

I ran this one past my husband who nearly vomited and told me ‘under no circumstances should I EVER put this on my blog’. Which clearly meant I absolutely had to put it on my blog. Girls, your period, when it eventually returns, will terrify the living bejeezus out of you. Aunt Flo comes a visiting and she’s brought company. Do not get rid of your mattress sized pads they give you in the hospital. You will need these, and more, to staunch the wrath of Satan that launches out of your already weak and vulnerable body. I’m not making this up. This here from a friend who shall not be named:

I get that most woman, over the age of puberty, have cellulite. But what I can’t understand is why the punishment for bringing a human life into this world, is the fact that our resulting bodies look like a plaster wall before tiling. Cavernous dimples riddle one’s body like the plague. My arms have cellulite. The cellulite in my cellulite has cellulite. Fuck, I’m not even convinced that it’s a dimple on my cheek anymore – I suspect the cellulite on the rest of my body has run out of space and is now moving up into my face.

And lastly, because why stop at Hell when we may as well fast track into damnation. Boobs. The only time I find a pap-sak appealing is when it’s 2 litres in size and filled with red wine. Nowadays, my not-so-fun bags resemble this cat. Except the only difference is that THIS CAT HAS PERKIER BREASTS.

Now, before you start selling your unborn child in panic, let me tell you it’s not ALL that bad. Yes, you may be softer, smellier and dumber than ever before, but you’ll also be the richest you’ve ever been. No man, not as in money, ‘cos you’ll have fuck all of that. As in your baby. Your baby will make  all of it worth it. Promise promise. Cross my hairy chest and hope to die. 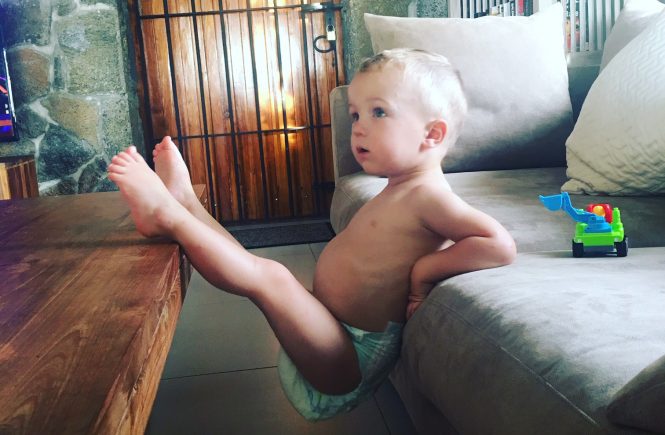 10 Things That Happen When You Become A Mom